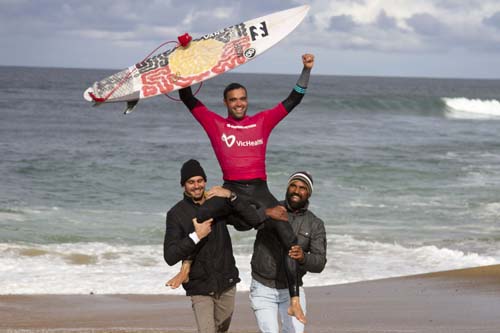 Held in clean 2-3ft waves at the world famous Bells Beach, the event brings together the top Indigenous surfers from around the country in an annual gathering.

Winning his last title in 2014, Carey showed his strength in the right hand waves putting together multiple carves and turns in the final to best 14 Year-Old Finn Hill (Avoca, NSW).

“Its cool to win the event again, but for me the biggest thing is just being here at the event and having that sense of belonging to the community.”

“It has been two years since I won my last one, and that is a true testament to how strong the field at this event is every year.”

Hill made a strong comeback in the final minutes with a 9.50, however did not have a strong enough back up score to come out on top.

“Finn was surfing incredible” said Carey.  “I have never seen him surf before, but he definitely has a bright future.”

Simon locked in a heat total of 18.50 points to finish ahead of Jasmine McCorquodale (Bateau Bay, NSW) on 13.04 points.

“I am just overwhelmed with the win” said an elated Simon.

“To get my highest ever heat total here in some great waves at Bells Beach is incredible.”

The inaugural Junior Boys and Girls divisions presented by Corangamite CMA were run in 2017 for the first time.

Full results can be found online at indigenous.polarproductions.com.a